Snakes may not seem like magical animals because they are seen so often in the real world, but people from Australia to the Middle East have been imagining magical powers in this animals for thousands of years.

This critter also plays a huge part in the Judeo-Christian Creation Story, one of the oldest stories there is. And he gets to take a little nip at Dudley, before his escape to Brazil, in Harry Potter and the Sorcerer’s Stone. So for at least three thousand years the Snake (or Serpent as he is sometimes called), has been featured in our imaginative tales of wonder and magic.

First, let’s do some research for our drawing of a Boa Constrictor:

Go to http://www.google.com and click on the “image” tab. Then type “boa constrictor” in the search box (without the quotes) and hit the search button. (A lot of the Boa Constrictor images seem to come from websites originating in Germany – I wonder if Germans like snakes as pets more than people in other countries?)

I thought it would be fun to play with the arrangement of my snake – but I didn’t have a real one here in my apartment to use as a model in different poses. So I found an extension cord that I’m not using at the moment, and wrapped it around a broom handle – playing with the loops until I found an arrangement that I liked. The result was a sketch that looks like this: 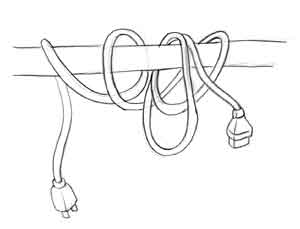 I didn’t need to draw the plugs, of course, but I did, just for fun.

I didn’t want the arrangement to be too complicated, but even with just a few loops, it’s getting hard to see which loops go in front of which other loops.

Practice making a sketch of an electrical cord, a piece of rope, or some other long item that you can drape over a stick to get the look you want for your snake. (The fatter the model, the better. My cord was too skinny, so I’m going to have to use my imagination to make it look like a giant Boa Constrictor). This sketch is just going to be for help with the final drawing, so don’t feel it has to look good. Just play with all the ways you can loop your “snake.”

Try to keep your model in the same place because you’ll need it later (my cat played with my “snake,” but that’s OK).

Here’s an important idea: your sketch does not need to look like mine. You can make your snake be slithering over a rock, sleeping in a pile… it’s your drawing, after all. 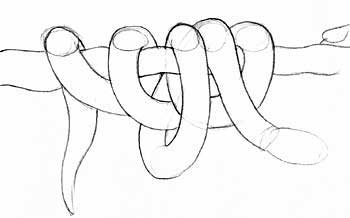 Here’s the first sketch I’ve made using my drawing of the electrical cord as a model. I’ve made the loops fatter, but when I look at a picture of a real snake, I can see that there are some things I need to do to make it look more like a snake, and less like a worm or a noodle.

First, a real snake is fatter in his body, and gets skinny towards his neck. (Do snakes have necks?) Second, I think it would be more fun if I let the tail dangle out of the picture, so the viewer will have to guess how long it is. (How long is a Boa Constrictor, anyway? You’ll find out if you look up a Boa Constrictor website at Google.com).

You will notice that I have drawn through the folds to make sure that they will connect up with each other. I’ve also drawn circles at the top of the loops to remind me that our snake has volume. We don’t want a flat snake, do we? 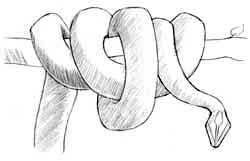 This is the way my sketch looks like now. I’ve used a photograph I found at http://www.boa-constrictor.de/index.html to help me draw the head. Now I need to continue filling in the shadows, put more detail in the face, and add the beautiful markings. I’m using my electrical cord to help me see where the shadows should go – I’ve put it next to a window so there is strong light coming in from one side. Notice how there is a thin line of light on the underside of each loop, where the light is being reflected back into the shadow. 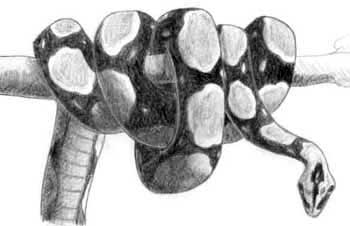 Ta Da! We have a Boa Constrictor, just waiting to take a “playful” nip at Dudley, or offer an apple to Eve.

Just a quick note on a question that plagues all artists – when is a drawing done? I can’t count the times I’ve worked on a drawing too long, and ruined it. It’s something that all artists do sometimes. So, I guess the answer is – when it feels done, and not a second later. Don’t worry, you’ll ruin some drawings too. No big deal, right? That’s the spirit!

If you’d like to know how people other than J. K. Rowling have described snakes in magical and mythical tales, you can see some of these ideas on this snake mythology site.