The cat has been associated with witches for thousands of years.

In fact, for centuries it was believed that witches could turn into cats whenever they wanted to.

As cats, the witches could sneak around their enemies’ homes in the dark of night, causing all sorts of mischief and grief.

This belief is the main cause of the persecution of cats during the middle ages, an odd occurrence when you remember that cats rid our homes of mice and rats, which eat our food and carry disease.

And a few thousands years before the Middle Ages, in Egypt, the cat was considered sacred. Go figure.

Step one – finding photos for your drawing of a cat.

As always, the first thing to do is to gather your models or photographs, so you’ll have something to look at while drawing. And to do that, you need to decide how you want your finished drawing to look.

This particular cat is really a witch, who has shape-shifted into a cat. And the Deputy Headmistress always looks very stiff and upright in the movies – not at all as loose and graceful as a cat usually is.

In recent times, the most famous human/cat transformations are in J. K. Rowling’s book Harry Potter and the Sorcerer’s Stone. You’ll remember that the Deputy Headmistress sat stiffly on the wall outside the Dursley’s house at number four, Privet Drive, waiting for Hagrid to deliver baby Harry to his aunt and uncle. At the time, she was a cat.

Cats don’t usually sit stiffly, as Albus Dumbledore pointed out. Cats also don’t usually have markings around their eyes that resemble square eyeglasses. We’ll have to make up the markings, but I found us a model for a stiff cat – it’s a photo of a very old Egyptian bronze statuette. You can’t get much stiffer than that!

I felt we also needed a model whose head is turned towards us, in order to be able to show the character of our subject. For this we can use this photo of a real cat.

Now we have to talk about using photographs for models. We need to use photos because animals don’t hold still long enough for us to draw them. If you have a cat at home, you know she can lie asleep for hours at a time, but the minute we sneak up close with our paper and pencil, she’s off and running. But we need to make sure that the drawing reflects our own imagination as well. And it’s OK to use two or more photos, as we are going to do with our first drawing, so that the end result is something totally new and exciting. 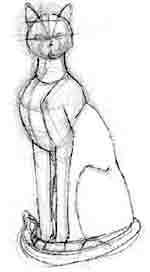 The first thing we do, after clearing a place on the table to work on, is to make a sketch that will show us the basic “feel” of the finished drawing. I actually made four sketches before I came up with one that I liked. You can see that even with this last sketch, there are a lot of changes. I was trying to find a basic form that had the stiffness of the statue, and the authority of Professor McGonagall. I also wanted to make sure that all the parts, such as legs and head, etc., seemed to be in the right place and the right proportion.

In this drawing we’re putting the real cat’s face on the sculpture’s body, and then we’ll add the markings around the eyes to make it look like the Deputy Headmistress is wearing glasses.

Practice making several drawings that are rough like this one. Make them with the intention of throwing them away, so that you will get comfortable with making mistakes. It is absolutely impossible to learn to draw well if you are not willing to make mistakes!

You’ll notice on the sketch that I have “drawn through” in several areas. This means that I have made marks on the drawing to remind myself that the cat is a solid form, and not flat, like a photo. We do this by making lines, much like the lines on a globe, that show us the roundness of the form. Now, go ahead and make your practice drawings!

You can see from the following drawings that a cat has a face that is almost, but not quite, round. The eyes will fall on a horizontal line that can be drawn through the middle of the head. (People eyes are in the same place, by the way). You can use these proportions while looking at a real cat, or the photo of a cat on this page, and it will help you put the parts of the face in the right place.

You should always draw the eyes as a circle, before putting on the top line for the eyelid. Eyeballs really are balls, and by drawing a circle first we remind ourselves to keep them round, no matter what expression we give the final drawing. Remember that the outside corner of the eyelid is always slightly higher than the inside. And yes, that’s true on people, too.

I have a tendency to always draw things on the left side slightly larger than things on the right, and when drawing a horizontal line it almost always wanders upwards on the right. To counteract this, I turn the drawing upside down! It’s easy to see any mistakes we make in proportions this way. And remember, it isn’t cheating to measure if you aren’t sure if something is in the right place, or the right size.

Step three, adding the shading to the drawing.

My drawing now has the shading on it, but no striped markings. I’ve erased most of the extra lines, and I’ve also roughed up the edges, so that it looks more like fur. I used the photo of the statue to help decide where to put the shadows. I’ve also moved the tail up to cover the front and rear feet, in part because I think the Professor would sit that way, and partly because then I don’t have to draw the feet! We’re almost ready for the markings now.

To help with the idea of roundness, go find a ball or a globe, and put it in a place where it gets a strong light from one side. It is very good practice to draw your ball, paying very close attention to all the places where it gets darker, and some of the surprising places where it gets lighter. It is these shadows that help us know that a thing is solid, instead of flat. If this seems like a boring thing to do, just remember that college age art students have to do it in their classes, too. 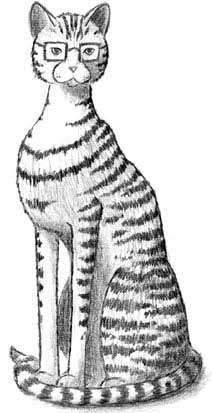 For an idea of where the markings will go, we can use the photo on the cover of a book that is available through Amazon.com. We could also use a picture of a tiger, since the markings on both big cats and little cats are very much the same.

You want to make sure that your pencil is very sharp when you add the stripes. Lightly pencil in the places where you want your stripes to go, and then color them in with your pencil, using short strokes that go in the same direction as the fur. And remember to make the eyeglasses around the Professor’s eyes. You will need to use your imagination for this, because Muggles never get to see cats that are marked this way.

Be sure and keep all your finished drawings in a notebook, because it will be fun for you to go back, even years later, and see the work you did.