They are the subject of nightmares for many people, and have a central role in the very non-magical book 1984 by George Orwell. They also star in some of the world’s greatest disasters, by bringing the plague-infested fleas from Asia to Europe by catching rides on ships. They also steal thousands of tons of wheat and other food from human storehouses, and can be deadly in crowded slums.

And yet they are favorite pets for many people, and are often used in research laboratories.

But there is one magical rat, who plays a large role in J. K. Rowling’s Harry Potter® Books. Which goes to show you that the human imagination can turn any animal into a magical creature!

Ron’s rat, Scabbers, is a ratty-looking rat who seems to sleep a lot, at least until we find out who he really is!. If we wanted to, we could show him sleeping. However, I liked the scene that introduces us to Scabbers, on the train to Hogwarts. You’ll remember that Malfoy came into the car with his friends Crabbe and Goyle, and after a few insults they tried to start a fight with Ron and Harry Potter. Scabbers put an instant stop to it by biting into Goyle’s finger – and he wouldn’t let go!. 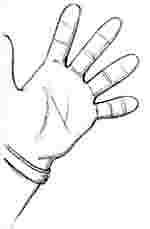 (Our model’s name is “Madge.” The photo is included here courtesy of her owners at the Lawrence Hall of Science, UC Berkeley). 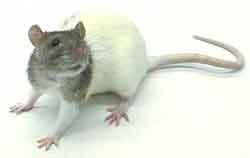 You have a model for Goyle’s hand that’s always willing to pose – it’s stuck on the end of your arm. When you’re making your first sketch of your hand, make sure to leave enough room on the paper for the rat. And don’t try to take a short cut and simply draw around your hand – it won’t look very good if you do.

Now we have to imagine what Scabbers would look like if he was being violently waved around in the air, with his little rat teeth sunk into Goyle’s finger. The very best way to do that is to imagine ourselves being swung around in the air, holding on to a giant hand with our teeth. I know you don’t look anything like a rat, but you have a backbone, and arms, and elbows, and knees, just like rats do. And they all bend in the same directions. If you don’t believe me, look up “skeletons” in Google.com, and make some comparisons between us two-legged critters and the skeletons of dogs, cats, or rats. 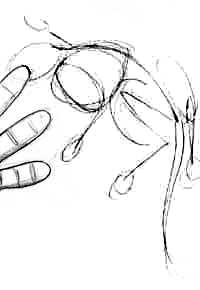 When I imagined myself swinging around in the air, I felt myself bending in the middle, and my arms went out to the side. I also felt my hands opening up, just like Goyle’s hand is in the sketch.

So now we start making our sketch of Scabbers in midair. I first drew an oval where his head will go, then drew a curving line for his backbone, and on down to the tip of his tail. Then I added an oval where his rib cage would go,

and put in the skeleton lines for his legs and arms (OK, “front legs” – but rats do seem to have hands).

I used my scanner to reverse the direction of Madge’s head so I would have a better model for the front end of my picture.

You can see that I moved the right front leg because I thought it was a better composition this way. I gave the tail more of a swirl. I’ve put two sharp little rodent teeth into Goyle’s finger. And I’ve erased most of the skeleton and drawn the outline in nice curving lines. Now we just add a small amount of shading (we need to keep the shadows consistent with the hand we’ve already drawn, remember).

Madge is a pretty, fancy-colored rat, but Scabbers is just an ordinary rat. J. K. Rowling describes him simply as fat, and gray. We can use a dull pencil to shade Scabbers, remembering to follow the direction of his fur with our strokes, and remembering that his tail and lower legs are naked. 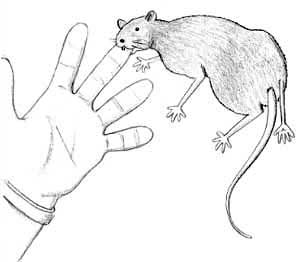 And there we have him! If you want to get fancy, you could draw in a train window behind Goyle and Scabbers. Or you could make Scabbers look a little mangier, and a little fatter, and a lot older. Remember to keep your finished drawing, and to sign it!