The Werewolf has been scaring the socks off people for thousands of years.

But what exactly is the difference between a Werewolf and a regular wolf?

They look exactly the same, which means we don’t have to mix and match animal parts for the Werewolf, the way we do for the Dragon, Unicorn and Gryphon. The difference is in their magic – a Werewolf is really a human in the form of a wolf.

Modern movies have given people the idea that werewolves really looked like people, with some wolf-like feature. However, when people really believed that this creature was real, he was a human in wolf form – you couldn’t tell wolves and humans apart.

The belief in Werewolves has had some rather important consequences in many human communities. 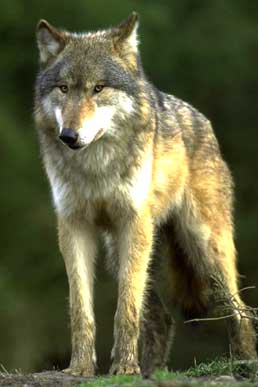 Back then, if my sheep are killed by a wolf, and if I don’t like my neighbor, I might believe that my neighbor killed my sheep while disguised as a Werewolf. People could clearly see wolves carrying off their sheep, but they really believed that shape-shifting was possible, and that werewolves were real.

People in Europe were tried, and hanged, for “crimes” like this, back when the belief in magic was still very strong. There are some fascinating stories about Werewolves at http://www.pitt.edu/~dash/werewolf.html#contents.

You can also read about a program that is trying to increase the wolf population of Europe at http://www.large-carnivores-lcie.org/wolf.htm. This site has some beautiful photos of wolves that you should definitely see.

Now, let’s learn how to draw a magical werewolf!

To draw our Werewolf, we can use the photo on this page all by itself, or we can combine it with the snarl we are going to use for the Three-Headed Dog, at http://www.users.dircon.co.uk/~creatfx/dogsnarl.htm. We do need to make the picture rather dark, because Werewolves hunt at night, when they’re scarier. If you decide to use the snarling dog picture, remember that only wimpy canines close their eyes when they’re angry – we’ll need to leave our Werewolf’s eyes open.

(The best way to use a photo from a website is to open the URL, and after the picture is loaded onto your screen, go off-line while leaving the browser open. That way, you won’t have to keep your phone line busy if you are using a modem).

Wolves, dogs, cats and humans all have eyes that can be drawn on a line through the middle of the head. It is a good idea to lightly draw this line, no matter how often you have drawn animals before. We tend to draw the eyes too high on the head, which looks funny. 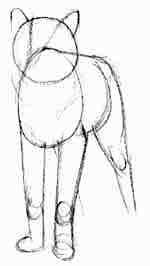 First we draw in a large tube-shaped form for the body, with the larger end in front. Then add on the legs and head. In the photo at the beginning of the chapter, the wolf’s hind legs get lost in the dark. This helps to show that it’s night, so I’ve made my drawing that way too.

Now we concentrate on the face and the snarl. We’ll leave the color patterns of the fur for later.

Changing the expression on your Werewolf is very challenging, especially if you choose, as I did, to use the head of the wolf at the beginning of this chapter for your model.

It would be easier to use the body of the wolf, and the head of the snarling dog, because the two heads are in different positions. If you decide to do it that way, your drawing may come out better than mine. 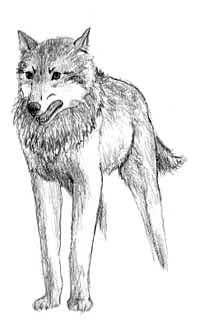 Now for the fun part of adding fur and color patterns. Remember to always make your pencil strokes go in the same direction that the fur is lying on the animal. If you don’t, your finished drawing will look weird. And remember that wolves don’t get a bath very often, so you can make him a little ragged if you want to.

If you look closely, you’ll see that I’ve changed the ears, since much of the expression of a canine is in the ears. I think he looks fiercer now. I’ve emphasized the eyebrows, and added a tail. I’ve also changed the length of one of the front legs. And I’ve roughed up the fur on his back, since dogs do this when they’re angry. And I’ve lowered the eyes – even with the line drawn in I had put the eyes too high on the head. See the difference between this drawing and the first drawing of the head? 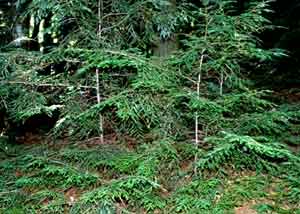 You’ll want to keep changing your own drawings, too, during the creation process. When something seems out of proportion or just a little strange, you might try turning your drawing upside down. This often helps us to see things that are out of place.

I have decided that I want my Werewolf in a forest setting, with dark evergreens behind him. And I might put just one branch in front of him ,since he will be even more frightening if he seems to be coming out from behind something. These trees are seen in the daylight, so I’ll have to put in just a suggestion of their form in the darkness. 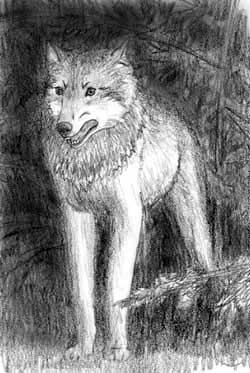 Ooh, I wouldn’t want to be Little Red Riding Hood when she ran into this guy on the trail. (Oh, wrong story…)

When making a drawing that needs to be dark like this one, it’s hard to do it with a number 2 pencil. For this purpose I use a pencil from the art store, called a Sanford Design Ebony Jet Black, extra smooth. They are not expensive, so you might want to take a trip to your local art store and look at the pencil display.

You might want to play with your own Werewolf drawing and try to see how to make him appear to be morphing from his human form. And if you have a German Shepherd at home, you might ask him nicely to pose for you – they make great wolves!